The world is explained by tales or myths on the one hand, and by intellectual concepts on the other. But Philosophy and Science aside, it is mainly Art which contributes to our understanding of the world. Art expresses itself through a middle course between these other two, through the „visually intuitive concept“,which receives its individual form in each particular work of art. Of all schools of art it is the Constructivists who have distanced themselves most severely from story-telling, and since they attempt to make visible universal principles, structures and processes, they do not seek the roots of their work in their biographies.

A Constructivist with a Biography

Reinhard Roy, born in 1948, is a Constructivist artist of the fourth generation. And yet he has a biography. We can recount that in 1986 while visiting a building site he hit on perforated sheets of steel that had originally been used as ceiling panels. He immediately realized that he had found a new, decisive tool for his work. With spray paint, using the perforated steel as a stencil, he could apply grids of points to his canvases. The Constructivist painter Reinhard Roy was born. Previously, he had produced sculptures and works in the style of the American Combine-Painters.

While it is unusual for a Constructivist artist to be able to recount an anecdote about his artistic development, even more unusual is the anecdote itself. To come upon a chance find and have his life changed by it is something one might expect of a Surrealist, a proponent of quite the opposite artistic school of thought.
The Surrealist lives his life ever expecting the „hasard objectif“ which colors his meetings with people and with inanimate objects. These meetings complete his limited self, jump-start his free associations and give him unespected insights for his dreams.

Considering that Roy had this surrealistic experience just as he was crossing the threshhold to Objective Art, which is concerned with logical and systematic creative processes, we may conjecture that his creative work is open to surrealistic influences: the irrational, the potentially uncontrollable. We will return to this later on.
The Other Roy

Nearly all authors who have written introductions to catalogs of Roy`s works have pointed out a cartain kinship between Roy`s Constructivist work and neo-impressionalistic Pointillism. Both use dots as the basic structural element of their images, placing them on the canvas in close adjacency such that they combine in the eye of the beholder into a new, collective intensity. Yet so far no one has remarked that a contemporary artist, Roy`s namesake Roy Lichtenstein, the American pop-artist, also makes use of a similar grid of points.

Many of Lichtenstein`s paintings are ironic idealisations of the medium of the comic strip. Lichtenstein composes his colored figures from grids of points, in analogy with the screens used in commercial printing. Drawing as he does from a model concerned with story-telling, he would seem to be diametrically opposed to Roy`s work as a Constructivist.
Is it then not futile to compare the two, based on the seemingly superficial resemblance of the grids of points? No, Lichtenstein does not truly narrate; his tales are not drawn from real life, rather he traces prefabricated blueprints of stories told. And that is what the grid of points is meant to show – man as a stereotype, his stories a cliché.

Roy similarly uses the grid`s repetitive character to emphasize the constructed nature of his works, which seem almost destined to follow another purpose as a prototype of industrial production. This idea is probably not foreign to Roy, since he was educated, among other things, as a designer at the University of Design Burg Giebichenstein feeling. 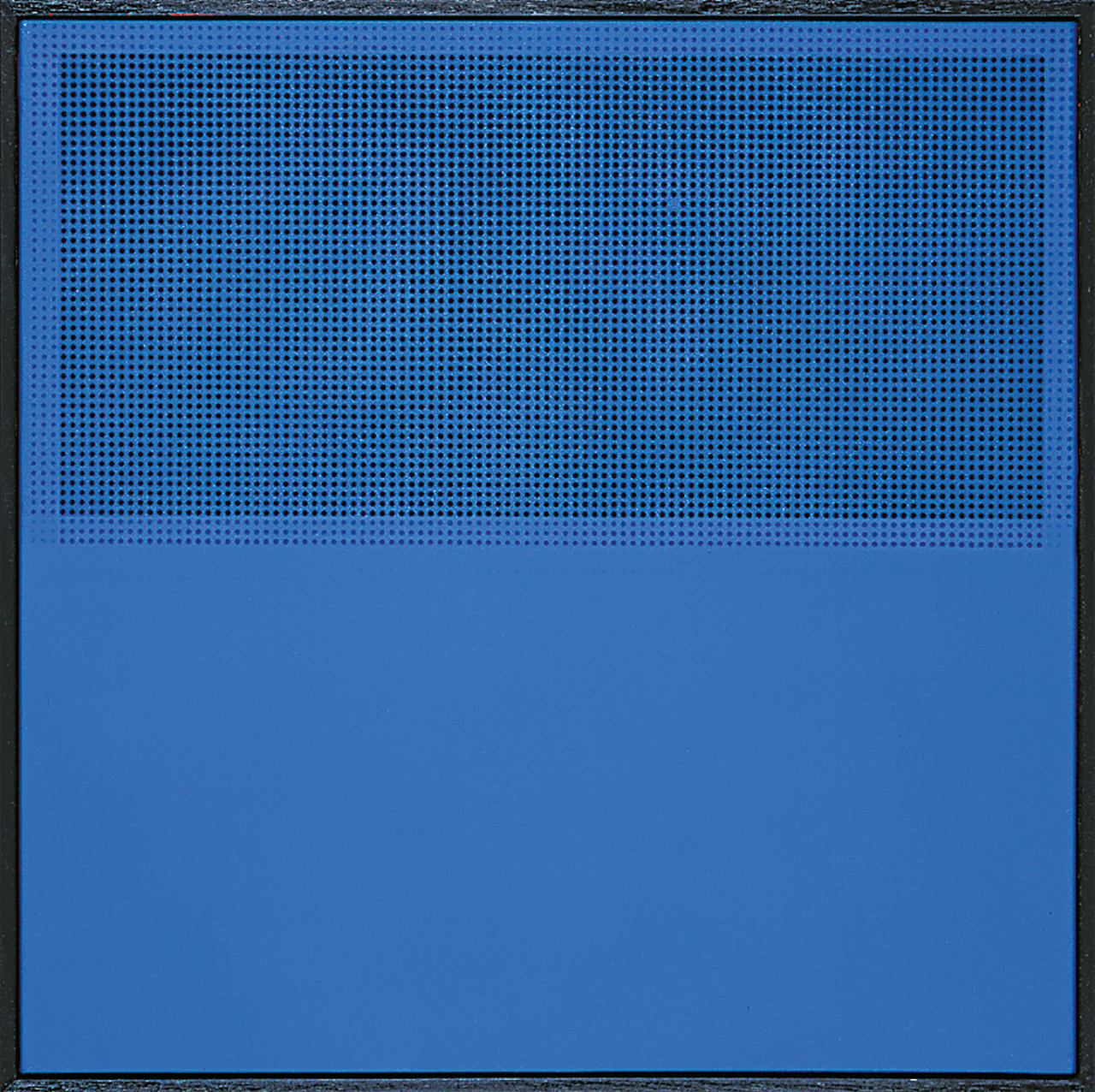 Reinhard Roy reaps an unbelievable richness of expression from the per se monotonous regularity of the grid. Sometimes he simply places a square grid in the center of a square painting. But usually he expands on the theme, perhaps by inserting a second grid, differing from the first in color and density.
Or he will superimpose several different systems of grids, creating a sort of moiré-effect. He may bend the grid as its edges, or thin, bleach or fray them, or partition it, cut in pieces or displace it out of the edge of the painting, letting it frame the rest of the image.

By juxtaposing the grid with its linear boundary he visualizes a basic contrast: the grid, as such, can be extended in every direction, it represents a form of
infinity Hegel called „schlechte Unendlichkeit“ – Roy sometimes lets this unbounded regularity find its end at the line which cuts it off; other times, it may continue on at the other side of the boundary.

As has been mentioned before, the monotone coordinate system imposed by the grid as such carries no individual expression. Roy gives it this expression through multiple variations of form and color. He seldom applies a grid of a single color; instead he uses two to five different colors to create one and the same grid, always mixing black among the other colors. One could say that black plays the role of the shadow: if Roy places the black spot to the right of the other colors, it gives the impression of light falling from the left, whereas a black spot on the left lets light fall from the right. A black spot below the other colors creates an impression of diffuse light from all directions.

In reality, light does not follow such precise rules in Roy’s paintings. Rather, it behaves upredictably and indescribably, like the budding three-dimensionality that seems to hide in the flat, grid-based compositions. That brings us to the irrational, sensual, perhaps surrealistic or surreal element in Roy’s Constructivist works, which bears closer examination.

In the midst of Roy’s grids of points, sometimes extending beyond their boundaries, splotches and clouds of color grow and spread. At the grid’s boundaries a glowing, almost electric light appears, it seems as though Roy is trying to visualize coming-into-being itself. Seldom, but repeatedly in 1987/88 there is a suggestion of landscapes. All these appearences are fluid and ephemeral, spontaneous and intangible. At times it seems as though Roy were recreating the non-representational, mystcal nature-romanticism of the great pioneer William Turner (1775 – 1851).
The important point is that Roy displays these irrational, auric elements in a conscious and controlled fashion, thus doing justice to the double meaning of the concept of „poetry“. Today we associate „poetry“ with mood, feeling and enchantment, but in ist Greek roots the word means to create, to produce with a particular technique.

Roy use three methods to create the cloudy, indefinite and fluctuating element in his paintings, which the viewer can easily follow. First, Tachistic brush strokes – am archaic method in his modern context, which he soon leaves behind; second, superimposition of two grids, one offset from the other; and third, a concentration of a certain color in particular zones of the grid, which strenghtens its chromatic intensity.

I could well imagine that some might interpret Roy`s leaning towards the indeterminate and imponderable as a suggestion of treason against the Constructivist movement, or at least as an example of the softening influences to which a movement is exposed when it has reached full acceptance and thus passed its zenith.
And yet Paul Lohse (1902-1988) of Zurich, that most strict of all strict Constructivists, displays the same tendencies. In his paintings of the Sixties and Seventies he had already covered the image with up to 900 densely woven squares of color. These systematic arrangements project a downright Tachistic and sponaneous chromatic feeling, even though they are laid down with a definite system in mind.
Lohse quite intentionally designed this leap from the rational into the irrational. In his „Lines of Development 1943-84)“, which Roy, by the way, has
quoted, we find the following: „We have left the tried and tested constellations and enetred into the space of the unknown.“

If we examine the matter more closely, we find that Lohse is not even an exeption, and thus we find Roy in good company. To take another example, Karl Gerstner, a Constructivist born in 1930, has put much thought into the seemingly unbridgeable opposites of emotion and logic, spontaneity and planning.
And yet he considers these contrasting elements, which are usually seen as irreconcilable antitheses, to be complementary positions. He is fond of supporting this thesis with examples from intellectual history, such as this quote from the Romanticist Wilhelm Schlegel’s „Athaneum Fragments“: „We can readily understand that it is premature to call poetry or prose ‘art’ before they have reached the point of constructing their works wholly from first principles.“

And yet perhaps we can discern another principle in the art of Reinhard Roy, one that would appear to be reserved to the third or fourth generation of
Constructivists. With Reinhard Roy, Constructivist art has entered the phase of enjoyment. His predecessors, or at least the first two generations of the movement, could not afford such a relaxed approach – for their strength was applied wholly towardsthe difficult problem of achieving recognition for their credo in society.