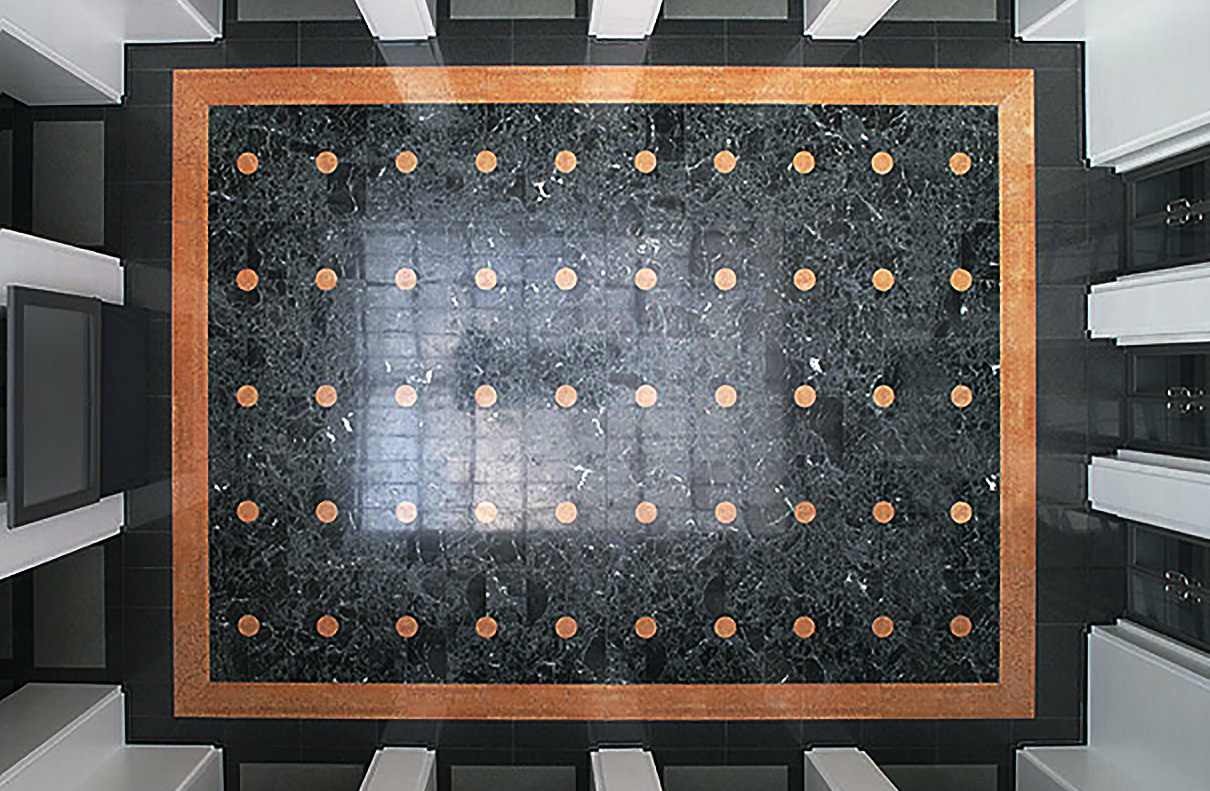 Reinhard Roy’s work “Berliner Boden” in the office building of the Kreditanstalt für Wiederaufbau in Berlin is only comprehensible in the context of the artist’s complete works. The ground is 10 metres wide and 14 metres long. The artist laid plates of green marble, 55 x 80 cm, with orange circles at the points of intersection and a diameter of 30 cm. The rectangular, light-coloured grained marble plates are placed horizontally with respect to the length of the space. A broad marble band circles the surface. It stands out from the side panels, the portals and pathways as something autonomous. The enclosure underlines the latent pictorial character of the work. A further beautiful element are the reflections of the walls on the polished ground.

The screen system causes the abolition or at least the relativization of the difference between a zone above, which is to be regarded as positive and the base zone below, which is regarded as oppressive and the division into what feels like a more closed or open side. These phenomena, which belong to what is called the Gestalt psychology, play an important role in conventional painting. Without them there would be no compositional design. Their principle is based on the balance between contradictory masses and the logical delimitation of the painting. According to the pattern there are different conceptual emphases, necessary but also contingent parts, which do not essentially influence the entirety of the painting.

In Roy’s concept every dot of the plan has the same importance. The surface is unlimited on the edges and is intentionally open, it may be continued beyond the painting. Its geometrical structure is decisive. Crucial aspects are not the central perspective or opacity, but the extreme frontality and transparency of the surfaces.

The “Berliner Boden” marks a rigorous modification of Reinhard Roy’s artistic concept as far as the spatial situation is concerned. The transformation from the verticality of his paintings towards the horizontal reveals new possibilities and results. The position of the viewer has completely changed. One can walk on the base, which functions as the bottom of the painting. The viewer is within the painting and not in front of it. He does no longer perceive the plan as a whole from one single point of view, but he is somehow part of the work, which is constantly changing as he walks through the space. He only perceives parts of the work, the entirety of the ground is made up of visible and conceptual elements. This goes for perception in general. The reality is not conceivable at once, but gradually, whereby the larger part remains invisible. The distribution of the dots, their distance and size in relation to the surface determine the density of the screen and therefore the whole appearance. Reinhard Roy has created a few works with such a wide screen, which implies lightness. In contrast to other paintings with closely-spaced dots on coloured surfaces and coloured layers, the colour plays an essential role in this particular work. In his work “Berliner Boden”, the frontality turns into perspective depth, according to our way of perceiving things. In the three-dimensional space objects are reduced and transformed by distance. The circles now appear as ovals, with the exception of those directly perceived from above, the plan is at the same time close and distant, depending on the viewer’s point of view, the homogeneity of the ground is purely conceptual, there is no immediate equivalent in perception. The simultaneity in the presence of the different parts such as in the vertical paintings is no longer possible. The marble band limits the expansion of the surface beyond itself. The difference of this work with regard to Roy’s other works and its relation to them refers to further forms of realization within the range of his artistic concept.