The analytical view of my objects, sculptures, pictures, and works on paper originated in a period of thirty years, like the theoretical discussion with the work process itself, illustrates, in view of the diverse work spectrum, that the point as a single form, the point raster and, in close sequence, the circle have remained the identifying features of my work. 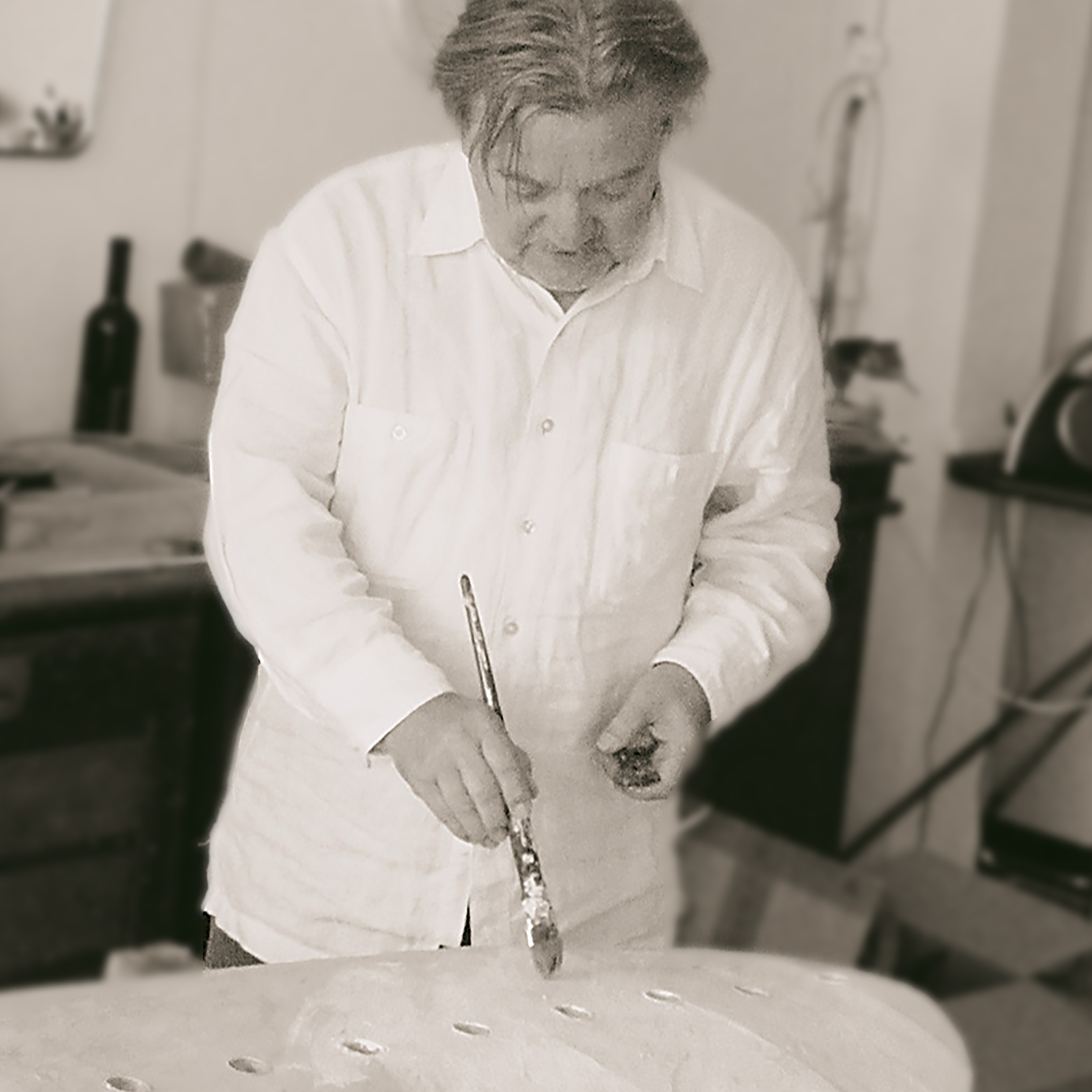 With these elements, suitable for composition and expandable in any direction, I achieve, beyond the two-dimensional depictions, spatial effects on different color bases through the variation of the distance of the points within the structure. The overlay of a monochromatic plane with a raster structure, its shift and rotation, then lead to further steps seeming to be imaginary – into the plane of the work or out of it, with the feeling of dimension. For me, it is more than logical to stay with these themes, which contain a spectrum of possibilities for portrayal. In terms of results, the processing of these individual areas, parallel in time, leads to a readable, overlapping unity of the design complex, especially clear when they are combined in exhibits and can unfold this effect.

A surrounding border of the homogeneously screened square, circular or elliptical work planes with lines or strips and the differentiation of a total structure only by the picture frame or the diametrically or parallel integrated raster forms point to the diversity of possibilities for dealing with an element. In terms of further results, I eliminate the geometrically fixed boundary, the shape of the circle or that of the ellipse with an open rasterization. Here I use a structure running outwardly or inwardly, with the size of its points changed, which makes the spatial impression on the surface in this variant come alive.

In the judgment of my pictures, there is often talk of a transcendental effect. The cause for this could be the spatial depths mentioned, which were developed from the raster structure – arranged in two dimensions, they suggest a third dimension. Or, carried further, the phenomena based on sight and psychological factors can cause a perception of non-existent movements within the statically arranged image area. According to the distance of the observation and viewing angle, the images vibrate or return to a condition resting in themselves. This feeling is subjectively differentiated. This optic phenomenon can be influenced by a coloration of the undercoat area aiming at this. Raster turns and the use of the base color for covering the first raster application lead, according to the rotation angle of the work material, to a spectrum of large raster overlays, which can be a departure point for further investigations, in terms of optical or technical aspects.

The sculptures and objects derived from the circular form achieve their effect through the force directed into the space and determined by the volume. In different series of works, the graduations of clearly defined geometric large forms are combined into one whole sculpture. A rasterization – whether brought in as perforation or with a haptic application – increases the relationship of the object to space. Light, shadow, luster or dim coloring support the third dimension, as does the reflection of the surroundings. The contemporary sculptures and objects developed from modifications of everything from the circle to the ellipse are elliptically constructed in the basic cut, side section, and vertical section, as in the diagonal section × × × . The main view is determined by a homogeneous rasterization, which is formed by a stringing together of pipe cross-sections. The pipes themselves lead through the corpus and connect its outer surfaces (flush). Based on the place of observation, this open structure allows a view into the object. Its spherical form, whether installed on the wall or lying on the floor, lends it the impression of floating lightness. 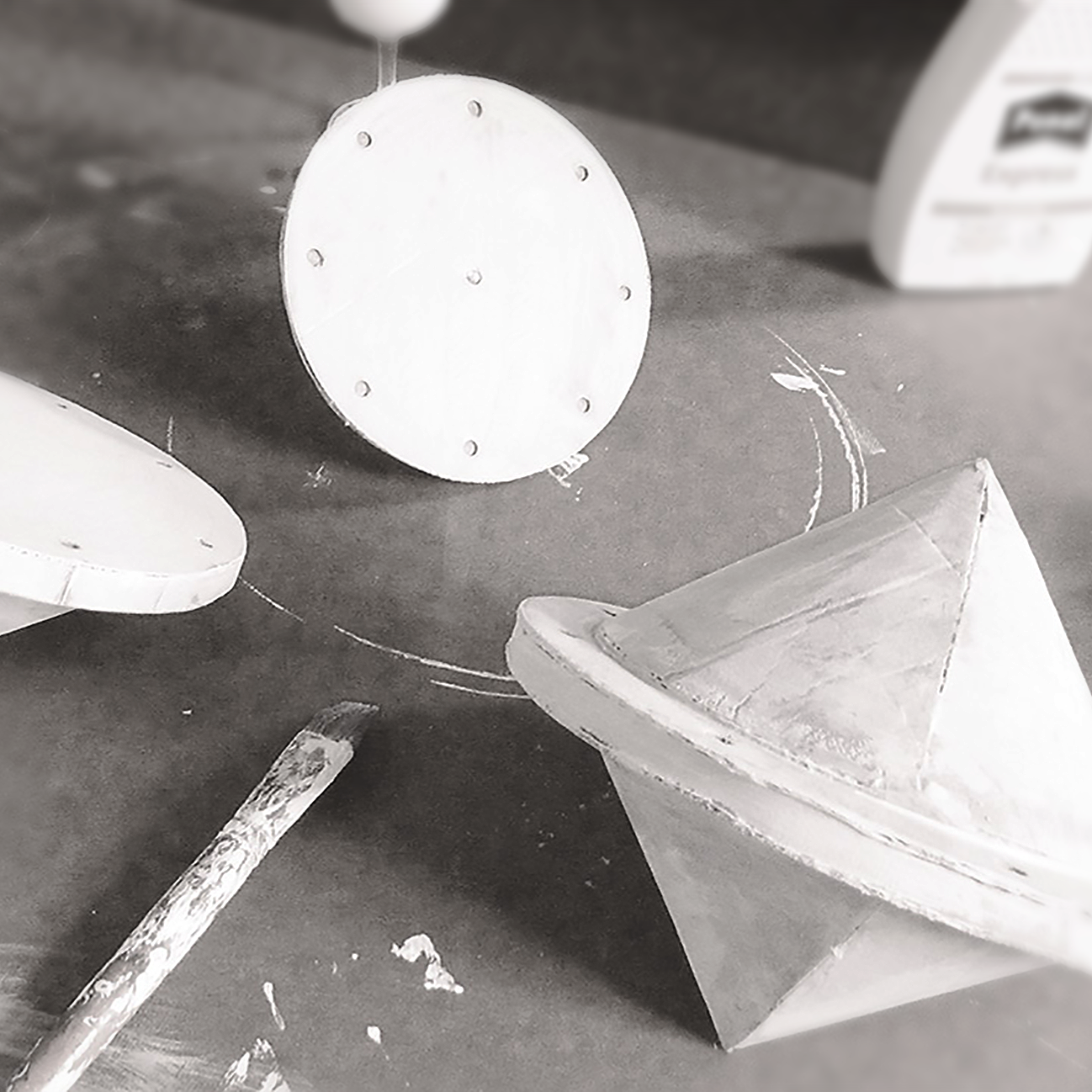